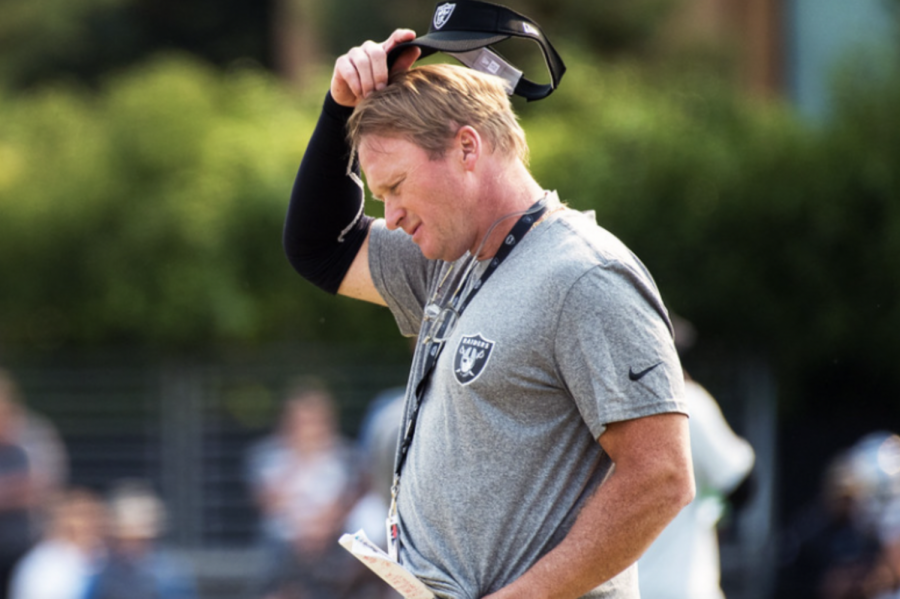 However, in past years the National Football League has been no stranger to sweeping social injustice issues under the rug. Now, the NFL is focusing on social justice initiatives by permitting players to wear messages of social justice on their helmets, campaigning slogans like “End Racism,” “Stop Hate” and “Black Lives Matter,” and the NFL is even devoting 250 million dollars over a 10-year period to fight systemic racism. Although this sounds perfect on paper, ending systemic racism will not just happen with a one-time check and performative activism with Instagram slogans. It takes accountability.

Jon Gruden, the head coach of the Las Vegas Raiders, recently resigned.This act was an explosion after years of neglecting accountability and inclusion within the NFL. Gruden wasn’t the one who started the fire, he was just the one caught with the match. Nothing will ever change until the organization tackles the issue of systemic racism head-on, starting at the root of the problem: the executives and owners of teams.

Emails between Gruden and former Washington Football Team president, Bruce Allen, were leaked while he was working as an analyst for Monday Night Football. Within the emails, Gruden exchanged explicit photos of Washington Football Team’s cheerleaders, said the leader of the NFL players’ union, Demaurice Smith, who is a man of color had “lips the size of Michelin tires” and even insulted the NFL commissioner Roger Goodell for pressuring the then coach for the Rams, Jeff Fisher, for wanting to have what Gruden called in the emails “queers.” These comments were following the 2014 draft of Michael Sam, an openly gay football player. If this doesn’t scream “boys club” to you, I don’t know what will.

When I think of a coach, I think of the glue that holds a team together. A coach is someone who motivates players to work together, who accepts and embraces everyone’s differences, and who is respectful to all parts of the team. A coach is not someone who belittles the culture or sexuality of others. Gruden’s emails prove that he seems to be the latter. The most astonishing part of all of this is the hypocrisy.

While the NFL donates millions of dollars to social justice organizations, we can’t forget how Colin Kapernick’s career ended because of his social justice efforts. Even though he opted out of his contract with the 49ers ahead of the 2017 season, he still doesn’t appear on the roster of any NFL team. While the league seemingly celebrated Carl Nassib for coming out as the first actively-playing gay player, flashing shades of rainbow pride all over their merchandise, his own coach was saying his fair share of homophobic slurs. That’s where the problem lies.

In today’s age of Instagram and social media, performative activism is real. I’m no stranger to having done this myself, but it doesn’t instill change. All of this campaigning for equality and inclusion is great and all, but what is it really fixing? Not much. Rather than saying “End Racism,” or “Stop Hate,” words that just pass through one’s head, the NFL has to focus on how they can create an openly inclusive environment for Black and LBGTQ+ players.

It’s ironic how the football players don’t seem to be the problem, but the people who call the shots and have the cash are the issue. This behavior wouldn’t apply to every coach and executive, but it still is present. Harsh as it sounds, I don’t think anything in the league will be changing soon. It’s important to understand that Gruden resigned himself. What would the NFL do if he was reluctant to resign? Let’s be honest: not much, but maybe they would do an “investigation.” Although Gruden was the one to come under fire, he can’t be the only coach engaging in this behavior. It’s ingrained within the system of the league itself.

If Gruden’s resignation opened my eyes to one thing, it was the hypocrisy within the NFL. They can’t preach inclusion or diversity until they take a good look at themselves.

Emily Roberge, Class of 2023, is a second year reporter and copy editor for WSPN. She plays for the high school’s field hockey and lacrosse team, and she skis for the high school’s alpine ski team. Outside of school, Emily enjoys spending time with her friends and family, traveling, and scuba diving. Contact: Emily_Roberge@student.waylandps.org