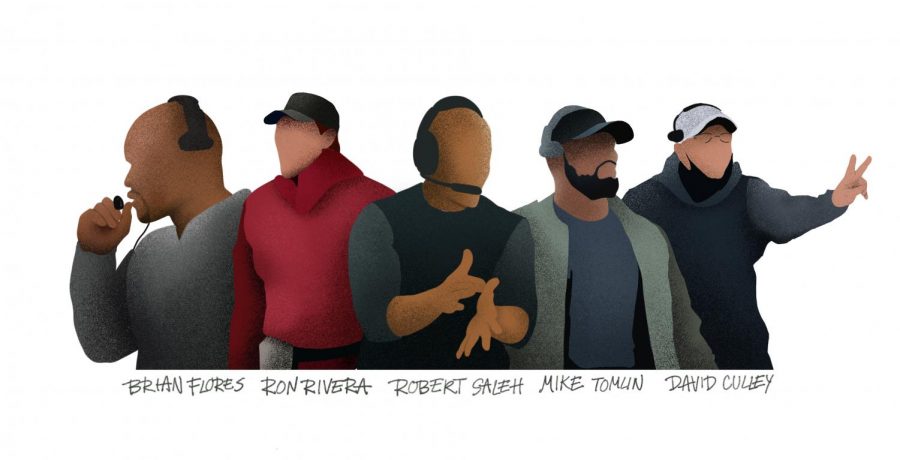 Mike Tomlin. Ron Rivera. Brian Flores. Robert Saleh. David Culley. The names of the only non-white head coaches in the NFL. In a league where minorities make up the majority of the player pool, one would expect more than 13% of the NFL’s head coaches to be minorities.

The NFL has long faced the issue of a racial disparity in the coaching staffs and ownership of its 32 teams. According to The Institute For Diversity and Ethics in Sports’ 2020 NFL Gender and Racial Report Card, over 70% of NFL players are people of color. But as you move up the NFL’s organizational hierarchy, the percentage declines, for each successive step. Just over 35% of the NFL’s assistant coaches are minorities. That percentage drops to the aforementioned 13% for head coaches and to just 6% for owners.

The NFL has made attempts to address this widening gap in recent years, starting with the Rooney Rule, which was established in 2003 by the league’s diversity committee. The Rooney Rule requires teams to interview at least one minority candidate for head coaching and general manager vacancies in an effort to promote diversity throughout the league.

Loren Powers, who is white and the head coach of the Harker football team, views the Rooney Rule as a “double-edged sword”. While he appreciates its intentions and the fact the NFL is acknowledging and attempting to address the issue at hand, he feels that “rules shouldn’t have to be passed just to give people an equal shot.”

“It sucks that we have to implement a rule like that for people to get a shot, because every person deserves an opportunity,” Powers said. “But the one nice thing is that the NFL is saying that, ‘Hey, we do realize that there is a huge racial disparity here.’ It shows that the NFL is aware of this and trying to make a difference, so I can see how it is advantageous.”

One caveat to the Rooney Rule, however, is that it does not require teams to actually hire the minority candidates they interview, simply just to interview/consider them. Brian Pinkston (12), an African American and varsity volleyball athlete, fears that this can lead to teams beginning to lose sight of the intentions behind the rule, perhaps causing them to view the Rooney Rule as “just another box to check off.”

“[The Rooney Rule] probably comes from a place of good intentions, but I just wonder what the actual effects are,” Brian said. “Teams could just include a minority candidate to fill that quota, when they may not even have the intention of actually hiring that candidate.”

In the 18 years since the Rooney Rule’s implementation, the greatest number of minority head coaches in the NFL in a single season was 8, achieved in 2011, 2017 and 2018, according to the 2020 NFL Gender and Racial Report Card. In order to further their efforts at promoting diversity, the NFL implemented a new resolution this past offseason, which grants teams two compensatory draft picks if they lose a minority coach to a head coaching or general manager position with another team.

Powers describes this new resolution as being “empowering” for the team that gives a minority individual a platform to showcase their skills and become a head coach. He references former San Francisco 49ers defensive coordinator Robert Saleh, who is Muslim and was hired to be the head coach of the New York Jets this past offseason.

“The benefits of this resolution are two-fold,” Powers said. “The 49ers gave [Saleh] an opportunity, and he crushed it, and now he’s a head coach, and at the same time, the NFL is saying to the [49ers], ‘We appreciate you giving this person an opportunity to show that he can potentially be a head coach one day’ and rewarding them for it.”

Ultimately, the racial disparity in the NFL has a lot to do with the fact the hiring is solely based on connections and who knows who. According to the 2020 NFL Gender and Racial Report Card, 30 of the 32 NFL teams have white ownership, and history has shown that these white owners tend, for the most part, to hire white individuals to occupy the various positions in their organization. Powers learned the importance of connections in the NFL firsthand, when he applied to become a scout for the San Francisco 49ers in 2018.

“When I was working in the [49ers] high school engagement program, Bill Walsh’s 19-year-old grandson joined the scouting department. How does a 19-year-old kid have the acumen and credentials to go be a scout at the NFL level? Well, he had the connections to get there,” Powers said. “He was able to jump that ladder and climb the ranks way higher than someone like myself, who has to go step by step, would be able to do.”

To Brian, this exclusivity and the fact that the coaches are selected from the same network of relationships over and over again is a huge impediment to the NFL’s efforts to promote diversity.

“You typically get this select club of 80 coaches or so that people pick and choose from to be their head coaches. We really need to try to mix that up: expanding beyond the initial 80 or so candidates is really crucial in trying to level the playing field, so that people from other positions, that weren’t given the same advantages, can have the opportunity to be a head coach,” Brian said. “I feel like there are a lot of qualified minorities out there who would be great head coaches, but haven’t been given the opportunity to do so.”

As Brian puts it, if NFL teams and owners continue to rely so heavily on these types of connections when hiring, the racial disparity present in the league now will persist. In addition to expanding the “coaching pool,” Brian believes that the league must closely monitor the effects of the rules they implement and make modifications when necessary if they wish to cause concrete change.

“These rules require revisiting if the league wants to prove their intent. You can’t just implement one rule and say, ‘Oh, look at how much we did,’” he said. “Every few years, you have to go back and see how this rule has helped since we implemented it, what can we do to further it, and looking at, not just the intentions, but also the consequences as well, because those are equally important.”

Vishnu Kannan (12) is the co-managing editor of Harker Aquila with a focus on sports. This is his fourth year on staff, and he hopes to continue telling the stories of Harker’s student-athletes and sports teams. He is a huge 49ers fan, and in his free time, he plays volleyball and the guitar and also enjoys listening to podcasts discussing the NFL.