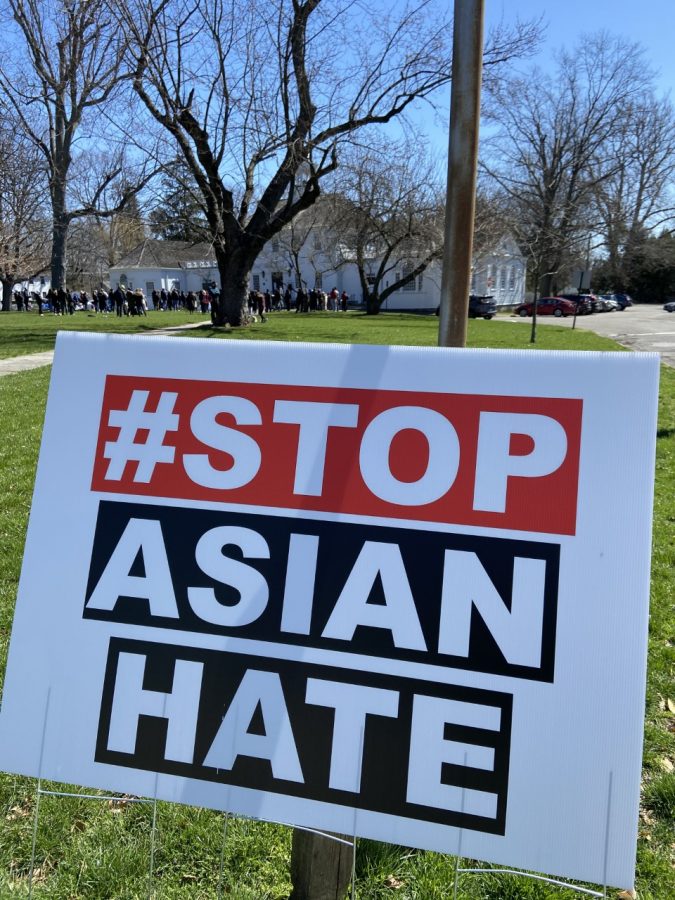 For five Asian American students and alumni of Ludlowe and Warde, the recent rally on the Town Green gave them an opportunity to be heard in a country that often erases their diversity, experiences, and American identity.

On April 3, 2021, Fairfield residents gathered on the Town Green to condemn anti-Asian racism and violence, and to stand in solidarity with the Asian American community. Fairfield Standing United, a nonpartisan political action group, organized the rally to “Stop Asian Hate.” Around 100 people, as well as numerous politicians and community leaders, were in attendance.

First Selectwoman Nancy Lefkowitz echoed the general tone among the legislators, stating, “I’m here today to stand in solidarity with the Asian American and Pacific Islander community in Fairfield and the state of Connecticut…I’m here to reaffirm my commitment as an elected leader to be a representative voice for you. I’m here to publicly denounce any acts of violence perpetrated against you, as well as the more commonplace daily indignities that you’ve been subjected to.”

The rally was also a platform for current Fairfield high school students and alumni to testify about experiencing these “daily indignities,” or microaggressions. Powerful and poised, the students spoke of peers and community members who questioned “where they were from,” their Asian American identity, their physical appearance, and their cultures. Many of the testimonies centered on their experience in Fairfield Public Schools: teachers who confused them for other Asian American students in the grade, a curriculum that lacked Asian American studies, insensitive comments from peers, and feelings of shame and isolation.

Amy Diamond began by reading the words of an anonymous student, who told of being confused for other Asian American students in the grade. On one occasion, a teacher’s assistant asked, “Which one is which?” when handing back papers in the class to the anonymous student and another peer who was also Asian. Amy read, “People see straight hair that looks black and dark brown, almond eyes, and they stop there. The rest of the details don’t matter.”

Sophie O’Brien, a Fairfield Warde alumna, spoke to her experience navigating the stereotypes of being mixed race. In response to people in school and in the community who questioned both facets of her identity, Sophie began to hide her Filipino heritage. She explained, “I started clinging to my whiteness…I tried to hide and downplay my Asianness.” She expressed her regret at distancing herself from her lolo and lola (grandparents in Filipino), ashamed that they were different from her classmates’ grandparents. Recently, she has made an effort to reclaim her Filipino heritage.

Kathy Trinh, a Fairfield Warde alumna, advocated for Asian and Asian American studies to be included in the district curriculum and spoke to her sense of cultural isolation when attending Fairfield Public Schools.

After her peers questioned her identity as a Vietnamese American of Chinese descent, Kathy internalized their microaggressions. “I didn’t say a word in essentially every class except Chinese class because that’s the only class that was taught by a person of color, that was taught by someone who looked like me,” she recounted.

Proposed Senate Bill 678, as mentioned by the Trumbull Diversity, Equity, and Inclusion Task Force’s Tara Figueroa, would include Asian Pacific American Studies in the Connecticut school curriculum. The bill is similar to an act signed into law in 2019 that mandated Connecticut schools to offer African American and Latino studies beginning with the 2022-2023 school year.

Fairfield Warde sophomore Sarah Genovese spoke in favor of an Asian American studies addition to the curriculum— “I want to learn more than white European history.” To Sarah, a lack of education can feed a lack of awareness, in turn contributing to overt acts of racism or the everyday indignities that people of color may experience in their interactions with others.

Senator Tony Hwang clarified that racism can manifest itself on different levels, not just in overt violence but also in the biases and assumptions that people hold.

Many of the students described how they were subjected to microaggressions throughout their education which had a cumulative impact on their identity and self-awareness.

Sarah Genovese shared, “It wasn’t until middle school when I started experiencing racism and discrimination, when I became self-conscious for the way I looked, for my ‘flat Asian nose’ or my almond-shaped eyes. I was so scared to go to school because everyone would pull back their eyes or make some sort of gibberish to mimic Asian languages.”

Sarah also witnessed a new kind of microaggression during the COVID-19 pandemic, a classmate who assumed she had the Coronavirus because of her race. Sarah responded, “Asians are not the virus. We are not the virus.”

As Warde senior Rosalie Hsu explained, the experiences of Sarah and many other Asian Americans “don’t happen in a vacuum.” According to Stop AAPI Hate, which records data on hate crimes against the Asian American and Pacific Islander community, 3,795 incidents have been reported since March 2020. Even though anti-Asian discrimination and violence has escalated during COVID-19, recent incidents are rooted in the long-held perception of Asian Americans as “perpetual foreigners” in their own country and a “model minority myth” that has fueled stereotypes, according to Vox.

In New York City on March 29, an elderly Filipino-American woman was brutally attacked by a man who shouted, “You don’t belong here.” Six women of Asian descent were killed at massage parlors in the Atlanta shootings on March 16.

On a local level, a Milford man was recently accused of harassing a pedestrian for wearing a mask and telling him to “Go back to China.”

Rosalie spoke to these recent events as she added, “We feel fear. Fear for ourselves when we’re walking alone. Fear for our parents and grandparents, the likenesses of whom we’ve seen beaten and harassed over and over again.”

Even as many politicians focussed on the opportunity to stand together and combat hate as a community, some acknowledged the systemic nature of violence and discrimination against Asian Americans in their remarks. Leaders from community organizations and grassroots initiatives including Make the Road CT, First Church Fairfield, Moms Demand Action, and the Trumbull Diversity, Equity and Inclusion Task Force explained their work and activism in this context.

Rosalie recounted an incident that prompted her to reflect on what it means to be Asian American. A friend’s mother said a distinguishing factor for a good Chinese restaurant is when there are “no Americans in the restaurant”—which the mother defined as “no white people.” Rosalie shared that this incident forced her to confront her identity and affirm, “I’m Asian but I’m just as American as everyone else.”

“I was born here, I was educated here, and I am a citizen in this community,” said Rosalie. “I’m sick and tired of being treated like some perpetual foreigner in my own country.”

Harper is the current Editor in Chief of Prospect. Harper served as the Opinions Editor of the paper during the 2019-2020 school year. This is her fourth year as a staff writer for Prospect.

Five Words We Should Understand in 2019