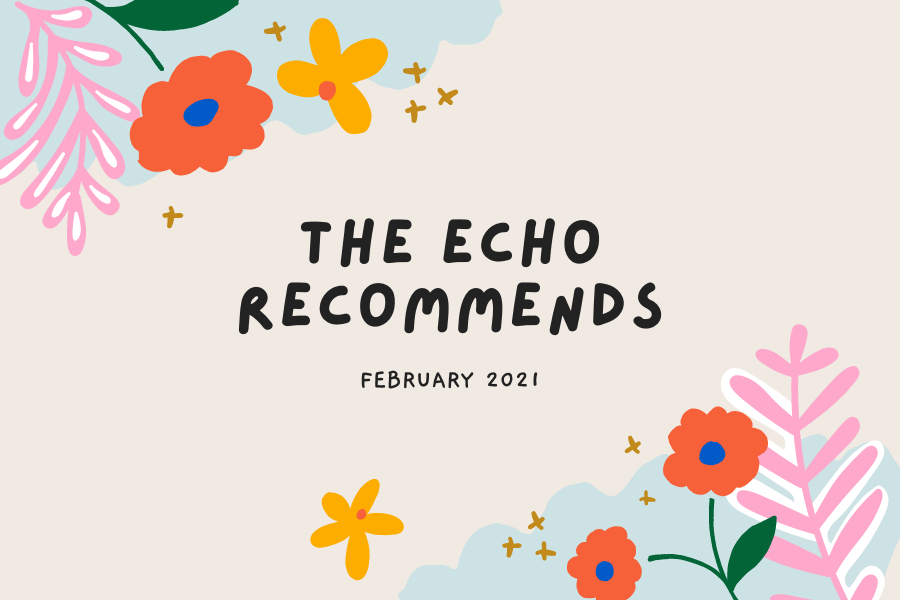 What once began as a week has now become a month: Black History Month. Black History Month offers an opportunity for people to appreciate the achievements and culture of black people who made large strides towards justice. This year’s theme for Black History Month centers around Black families, particularly considering representation, identity and diversity. There have been many releases from Black creators over the past decade that uphold these values, and The Echo has selected some of our favorite recommendations from Black artists that celebrate and empower their voices. Happy Black History Month!

Leaders 1354 is a clothing company that is Black-owned and based in Chicago. Their streetwear is iconic and has been featured by many celebrities that call Chicago their hometown. From hoodies, to t-shirts, to socks, to hats, they’ve got something for everyone. My wife would tell you that I own too many pieces of clothing from that store, but I would say there is no such thing. They have collaborated with the Chicago Bulls, the Chicago Blackhawks and other streetwear icons like The Hundreds and Billionaire Boys Club. You can also find other streetwear brands for sale in their store. Their store is in the West Loop, about a mile directly east of the United Center. You can visit their website at https://www.ldrs1354.com/

Dana Balmas – “When They See Us”

“When They See Us” is a miniseries on Netflix that follows the lives of five suspects who were charged in the infamous Central Park Jogger case. The theory was that five children sexually assaulted a fully-grown white woman, but there was no evidence that pointed towards them being guilty. It is a tale of a racist community and justice system that only fights for the privileged. In just a few twists of evidence and wording, the main detective turns society against these boys and imposes her own biases on a supposed unbiased process. Though extremely disheartening and difficult to watch at times, it is based off of a true story that needs to be shared. Their names must be remembered so that we can work towards a future where a mistake like this does not happen again. The Central Park Five: Kevin Richardson, Antron McCray, Raymond Santana, Korey Wise and Yusef Salaam.

“Ring Shout” by P. Djeli Clark is a novella set in an alternate history 1920’s America where magic is real and a trio of young Black women fight against the Ku Klux Klan and the demons they’ve summoned. This story beautifully examines trauma, both personal and generational, revenge and what justice really is. It left me in tears and with a deeper understanding of the themes it explores and contemplates. It’s a short book that had a big impact on me, and I recommend it for any and everyone.

“Children of Blood and Bone,” a novel by Tomi Adeyemi, is the first in its trilogy. This book is an amazing story inspired by the author’s West African history and religious deities, which blends the fictional side of dark magic and fighting. Follow along Zelie, Tzain, Inan and Amari as they battle all odds and an unexpected romance as they fight against discrimination, injustice and equal power. The author ties in political and social issues relevant to this day to  the plot, making it an  engaging and quality read that everyone should have on their reading list this month.

Jaclyn Bobbe- “A Black Women’s History of the United States”

“A Black Women’s History of the United States” written by Daina Ramey Berry and Kali Nicole Gross is a book that emphasizes the perspectives and stories of African American women to show how they are—and have always been—instrumental in shaping our country. This book is a celebration of Black womanhood, which begins with the first African women who arrived in what became the United States to African American women of today.

“Ctrl” (pronounced “control”) is the debut album by SZA, an American singer from St. Louis, Missouri. The album explores interpersonal relationships and insecurities. Among the 14 tracks, special guests are featured including: Kendrick Lamar, Travis Scott, James Fauntleroy and Isaiah Rashad. My personal favorites from this album are “Normal Girl,” “Anything” and “Garden (Say It Like Dat).”

“2014 Forest Hills Drive” was released in 2014 and won the 2015 Billboard Music Award for Top Rap Album. It features many hits such as “No Role Modelz” and “Wet Dreamz.” These songs dive into singer J. Cole’s past and tell the story of a young kid growing up in Fayetteville, North Carolina. The album cover pictures Cole sitting on top of the roof of his home on Forest Hills Drive, and it has been one of the most influential albums released.

“Stamped: Racism, Antiracism, and You” written by Jason Reynolds and Ibram X. Kendi explores the history of race and racism. It was adapted to be more youth-friendly from Kendi’s non-fiction book, “Stamped from the Beginning,” in order to help generations, both current and future, understand past ideas and perspectives and connect them to the present. This book taught me so much about history and also disproved some of my previous beliefs regarding racism and antiracism, especially those involving historical figures and what has been taught in school.

“Hidden Figures” is a movie and book written by Margot Lee Shetterly and Winifred Conkling. It is based on a true story of three African American women mathematicians and the work they did for NASA from the 1940s to 1960s. The book and movie show the women’s persistence and determination to accomplish their dreams, even when doubted by their co-workers. The three women looked beyond their gender and skin color and focused on the talent they had.

On Jan. 23, 2021, gymnast Nia Dennis presented a floor routine at the University of California in Los Angeles (UCLA) commemorating her identity and culture. The performance features songs from various black artists of the past and present, including but not limited to Beyoncé, Kendrick Lamar and Soulja Boy. Videos of the spectacle quickly went viral on social media, amassing over 8.6 million views within 48 hours of posting.

Rising alternative pop artist Isaac Dunbar has released rapid-fire singles since his debut, freshman year, in 2018. With his ethereal synth pop beats and dreamy vocals, Dunbar has amassed over 945 thousand monthly listeners on Spotify and will continue to grow with the release of his next EP, Evil Twin, on Feb, 19, 2021. His works include anthems about rejecting traditional masculinity, addictive tracks on toxic love and songs lamenting the bittersweet feeling of coming-of-age. Whether you may relate to experiences as a queer teenager or simply enjoy poetic, flowery storytelling, Isaac Dunbar may become your next top play for Spotify Wrapped 2021.

In his debut album “Channel Orange”, Frank Ocean blends R&B, hip hop and soul elements to create a complex mosaic of themes. In it, he explores drug use, his bisexuality, college, his dreams and aspirations and searching for a real love. Displaying incredible range throughout, Ocean blends contemporary sounds with an understanding of his Gen-Z audience to write a very fulfilling and beautiful album.

In this non-comedy special by Dave Chappelle, he provides his commentary and opinions about the BLM rallies of the summer of 2020 and the social unrest of the time. A truly awakening commentary from my favorite celebrity. You can find this on youtube.

FKA Twigs is an avant garde singer and songwriter. Some of my personal favorite songs of hers are “Cellophane” and “Mary Magdalene.” If you ever need some dramatic music to cry too, my first recommendation would be any FKA song!

“Ma Rainey’s Black Bottom” on Netflix is a film based on a true story of a Blues musician and many other artists getting a gig in a Chicago recording studio in 1927. The film stars Viola Davis and Chadwick Boseman. This movie feels larger than life, and it opened my eyes as a musician and singer to feel proud and joyful, just like the  artists who became so  passionate for their craft. It is definitely worth a watch.

“Harriet” is a fantastic film that you can rent on Xfinity. The movie was based on the true story of abolitionist Harriet Tubman and the Underground Railroad. The actors and actresses did a wonderful job portraying the emotions of these characters and brought the story to life. It was an eye opening movie, and if you haven’t seen it I definitely recommend it.

CoryxKenshin is a Black gamer and YouTuber from Michigan who primarily plays horror games. He has a following of over 4 million subscribers and has garnered so much success by mixing horror with comedy. Personally, watching Cory’s videos over the years helped me conquer my irrational fears and gave me a sense of community online.

Maddie Pope – “A Song Below Water”

“A Song Below Water” by Bethany C. Morrow is a captivating novel about Black sirens that covers racism and sexism, while following a sister-like bond in two best friends. When a murder trial takes place in Portland, everything changes for the girls and they have to work together to stay safe.

Aura Noor is an online shop run by Sumaiyah Noor, an artist on Instagram using the handle @fleuranoor. Noor sells gorgeous handcrafted items such as wire-wrapped crystal jewelry, empathy veils, resin art and prints of her own artwork. Aura Noor has beautiful items to fit anyone’s spiritual or aesthetic desires. The site describes their mission as “growing, enhancing and feeding your aura and spirituality.” For any crystal fanatics like myself, anyone spiritual or even people who simply like color and sparkle, buying from Aura Noor is a great way to support Black-owned small businesses during Black History Month.

“Cinderella is Dead” is a beautiful fantasy retelling of sorts of the famous story of Cinderella. It’s also an epilogue of sorts, following Sophia, who goes to the ball to kill the prince and falls in love with her friend Constance as she does so. It’s a queer story starring a Black main character, and it’s one of my favourite retellings I’ve ever read.

Megan Pete, better known as Megan Thee Stallion, an African-American rapper, released her new album “Good News” in November of 2020. The album reached number 1 on Spotify and got a gold ranking. Pete herself won 4 grammys, including Best New Artist, Record of the Year, Best Rap Performance and Best Rap Song. While all of her songs are good, “Crybaby” has been a new favorite of mine, featuring DaBaby, another African-American rapper.

Henry Lewis became the first African American to lead a major symphony Orchestra in the United States. Directly after the 1968 Newark riots, Lewis brought the Orchestra to the neighborhoods that were the most destroyed and would have them perform in outdoor venues and local highschool gyms. He also broke societal economic barriers by offering $1 tickets to concerts in the Newark Symphony hall. He somewhat started a different approach to conducting, one where he didn’t act as a noble to be conducting. Where conductors now are praised for not acting like elites, Lewis had done the same thing long before any of them. Recordings of his music can be found online.

Amerie is a junior this year, this will be her second year as a member of The Echo. They are involved in marching band and have hobbies such as gaming when they have the time. In the future, they may want to try out being a video game tester and may want to travel around a bit.