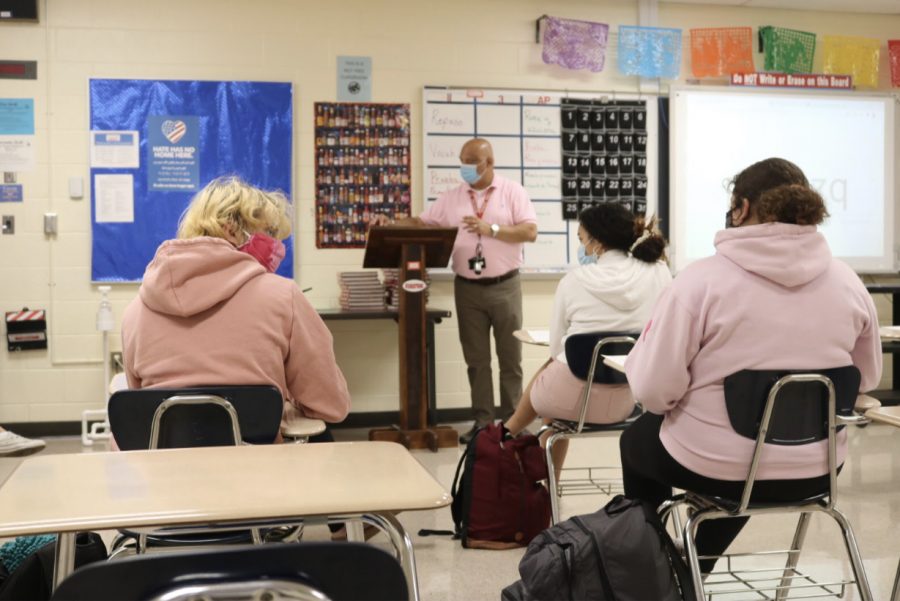 I (a POC) was walking to class on my first day in the school after moving into the area and didn’t know what room my class was in, or even what floor. I wasn’t close to anybody in the school and was so nervous to be so outnumbered as a minority in the school. I asked another male (white) in the hallway I was in at the moment where the class I was looking for was. He told me that it was right past the cotton field, and that I shouldn’t have trouble finding it. I was too shocked to ever tell the principal and was worried about retaliation…

On June 19th, @dearklsd made their first post. The account, started by a Kings alum, was created amidst the turmoil following the deaths of Ahmaud Arbery, George Floyd, and Breonna Taylor. Over the course of 4 weeks, the account uploaded over 150 anonymous stories sent in by members of the community who have either witnessed or experienced racism, sexism, or homophobia at Kings. The account was part of a national movement of students using social media to start conversations with their school districts.

On June 22nd @dearklsd shared, “My brother, who’s in the 7th grade, was on the bus with me and a white kid said he would shoot my brother if he came near his house and we were both so in shock we couldn’t even say anything and the bus driver glanced but didn’t do a thing.”

Another post from June 27th reads, “I’m not a person of color. I graduated in 2016 and it was disgusting how openly racist kids were and just didn’t care. People use the n word all the time and call black people monkeys like its nothing and receive no consequences. I am curious as to what the school district has in mind for action against this, I won’t believe it until I see it. I grew up in the Mason area and I now live in Georgia and almost no one in the south reps the confederate flag as much as kids in suburban freaking Ohio do, it’s embarrassing.”

Chloe Brizandine, a junior, has heard similar comments in school.

“The other day I heard people saying that racism isn’t a problem because it doesn’t directly affect them. I’ve heard a lot of racist comments like ‘cotton-pickers,’” Brizandine said. “I’m just so tired of people not realizing that racism is an actual problem in this world.”

In response to the @dearklsd account stories and in an attempt to create an anti-racist culture at Kings, teachers Michelle Bodey and Jorge Gonzales have started a new club, Knights Organizing Against Racism (KOAR).

“A couple students approached me over the summer [because of] what happened with George Floyd and the Instagram account, and they asked me about advising an Anti-Racism group,” Bodey said. “Mr. Gonzales had had Culture Club going on, so I talked to [him] and he said that’s really Culture Club’s aim so we’ve just kind of rebranded it into a more explicitly anti-racist group.”

Gonzales said that the rebranding is more than just a name change, it’s also a shift in focus.

“Culture Club wasn’t the name that really lent itself to telling everyone in school this is what it’s about. Whereas I think KOAR pretty much tells you why we’re here and why we’re together. It’s not only a name change, but it’s also trying to get more focus on the things that we need to do in order to organize against racism,” Gonzales said. “That’s our focus for this year: to come up with projects that students, when they take part in them, feel like something is being done.”

The projects will depend on what direction the students want to take the club , but Gonzales predicts that they will be in the realm of community service, programs for underclassmen, and potentially guest speakers.

Besides helping the students run the club, Gonzales is also a member of the Diversity and Inclusion Taskforce with community members and staff. For the past few years, the taskforce has worked with the Board of Education to create a resolution, which was published this past summer.

The “Resolution Denouncing All Forms of Racism, Prejudice and Discrimination” includes four sections that outline how racism will be addressed within the school district.

Section 1 states that the Board and the District denounce any form of racism, bigotry or insensitivity, and that they will further their commitment to creating an anti-racist environment.

Section 2 specifies methods in which they will achieve that kind of environment such as course material reflecting cultural and racial diversity, maintaining a safe learning environment, eliminating inequitable practices, and adapting anti-discrimination policies.

Section 3 provides resources like the National Board’s Equity Standards, an Implicit Bias Analysis Guide, and Social Justice Standards which they are using as a guide for their efforts.

The final section states that this resolution will take effect at the start of the 2020-2021 school year.

Superintendent Tim Ackermann, one of the individuals who signed the resolution, said that this resolution was created to fill a gap that exists within board policy.

“One of the first things—before we created the plan—that we talked about was what policies do we have? When you really look at our board policies, it speaks of racism here and there, but there isn’t a specific anti-racism policy,” Ackermann said. “Now this is not a policy, this is a resolution. We felt like it was important to show and tell our community that we believe Kings can be and should be an anti-racist school district.”

Ackermann said that with the current social environment, 2020 felt like the right year to move forward with the plan.

“It felt like with everything going on, the timing was right to really start taking action to show the community that we support all of our kids but we also support our students of color,” Ackermann said. “There’s been a lot of social unrest over the last six to eight months, and we’ve been working hard in the district to bring a lot of cultural competency training to our staff.”

On September 22nd, 2020, President Trump issued the “Executive Order on Combating Race and Sex Stereotyping” which bans diversity training because it “perpetuates racial stereotypes and division and can use subtle coercive pressure to ensure conformity of viewpoint.” This only applies to the Federal workforce, and therefore no part of the school district’s  resolution is affected by the executive order.

The resolution came shortly after the creation of @dearklsd.  Ackermann and Board President Peggy Phillips, the other signatory on the resolution, both say that they read almost every post on the account, and Phillips said that they were “disturbing.”

“Usually with anonymous posts, which most of them were, some people would say maybe they were making it up or maybe that wasn’t true. How I always take it is that there’s always some shred of truth in anything that’s anonymous,” Ackermann said. “Whether it’s perception or its reality, I don’t want that in our school district. I don’t want our kids to feel that way. I want to validate their feelings, and see what we can do to understand if it is happening, why, how, what we can do in the future, or if that is their perception, why is that their perception?”

On June 26th, Ackermann submitted a message to @dearklsd and asked the administrators of the account to use his name. In the post he said, “I have read all 103 posts and my heart is broken. Thank you for sharing your stories and I am sorry you have experienced them. These are empty words without actions. I promise you will see actions to create a district that is free of hate, racism, and oppression and one filled with love and acceptance.”

KOAR is working to create the kind of high school Ackermann described, but Gonzales recognizes they may never reach a completely anti-racist environment.

“I don’t know if becoming a complete anti-racist [school] is ever possible. I don’t mean that as this job is just too big. What I mean by that is it’s a journey. We have to get on this journey where we know that this is our goal to become anti-racist, but we’re always in the position to improve ourselves and to improve our school,” Gonzales said. “So what does it look like? Everyone knowing and trying to be better, as far as racism is concerned, but other isms too. We don’t want to have our unconscious bias always playing against us. Since everyone does have a bias, I think the best thing to fight those biases is to know what your biases are. So when they creep up, like they’ll do, no matter what, it’s human nature, you can deal with it and tamp it down.”

Bodey agrees that the journey isn’t as simple as it may seem.

“There’s a lot of messaging in schools that being kind all the time is our goal. We absolutely should be kind to each other, but I worry that a lot of people think that if we’re just nice to each other that all the other problems will go away,” Bodey said. “Just being nice to each other isn’t going to break down the systems that are perpetuating the inequity. Yes we need to be kind, but we need to do so much more.”

Abby is a senior and has been going to Kings since kindergarten. In the seventh grade, she got into theatre both at school and in the community, and it has stuck ever since. Some of her favorite productions she’s been in include The Curious Savage and Footloose. Apart from theatre, you’ve probably heard her talking about Tom Holland and the fact that she met him on August 25, 2019. Before joining journalism, Abby already enjoyed writing short stories, and she’s excited to begin her second year with the journalism staff. Of all the types of journalism stories, she most enjoys writing analyses. She's looking forward to pursuing degrees in both Criminology and Theatre starting next fall.

Affirmative action is not the best path to diversity