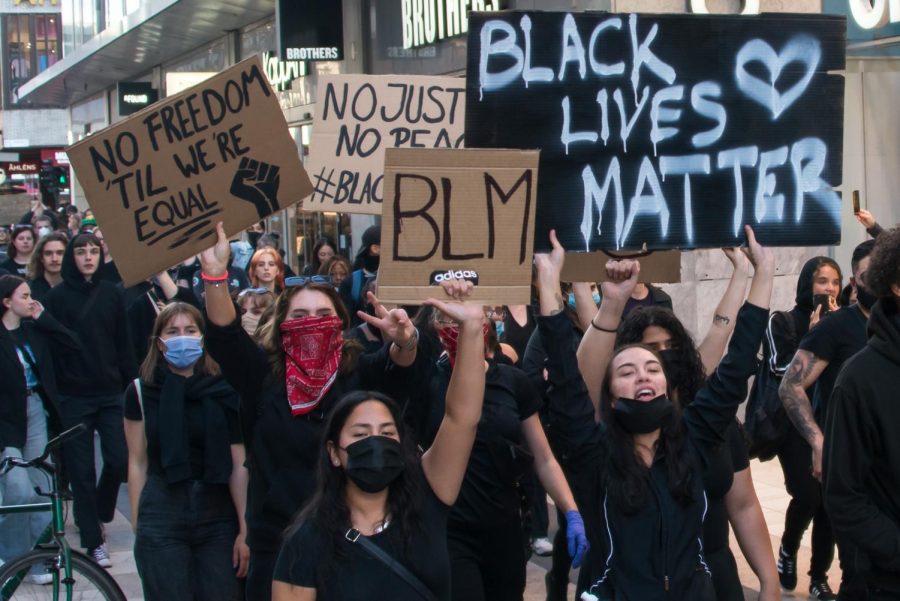 On October 5th, 2020, another unarmed black man, Jonathan Price, was shot by a police officer in Texas. It is this type of violence that raises the voices of millions, crying out for true “liberty and justice for all”.

We see this continued today in the Black Lives Matter (BLM) organization. The BLM organization was founded in 2013 by Alicia Garza, Patrisse Cullors, and Opal Tometi in response to the acquittal of Trayvon Martin’s killer. The movement focuses on criminal justice reform, celebration of differences, and freedom and justice for Black people.

Most recently, the phrase has been used to demand change in response to the murder of George Floyd. Floyd was unjustly killed by police officer Derek Chauvin on May 25th, 2020, in Minneapolis Minnesota. Witnesses caught the murder on video which was posted to Facebook and has since received over 1.4 billion views. The video contained graphic images of Chauvin holding his knee over Floyd’s neck as he gasped for air and pleaded “I can’t breathe”. This documentation is eye-opening, devastating, and infuriating. In the days that followed protests demanding justice ensued all across our nation. The protests began in Minneapolis and spread to many other cities like Los Angeles, Memphis, Philadelphia, and even Wilmington. Some protestors took nine minutes of silence to represent the nine minutes that Floyd was held under Chauvin’s knee. Others drew graffiti on police cars or burned and looted buildings. In Delaware, protestors blocked both sides of I-95, calling it the “I Can’t Breathe Protest”. In some cities, curfew was enforced and the national guard was brought in to provide security. However, several authorities tear-gassed protestors and shot rubber bullets at them. Some protestors, as well as law enforcement members, were severely injured and even killed during the riots.

Through all the unrest, one message has remained clear, “Black Lives Matter”. The time to speak up for justice for Black people and other marginalized individuals is now. The younger generations have been especially vocal on both sides of the issue, debating over whether “Black Lives Matter” is a humanitarian or political issue. It is a humanitarian issue.  In response to the movement, Archmere has taken several steps towards promoting equality and celebrating diversity on campus. Over the summer, Ms. Danyele Dove was hired as Archmere’s first Director of Diversity and Inclusion. Ms. Dove not only serves as the director of guidance and junior class counselor but also promotes justice and equality on campus. In addition, Diversity, Equity, and Inclusion Focus groups have started up on C days during M and P blocks. These discussions seek to actively combat racism on Archmere’s campus by pursuing meaningful conversations about inclusion and equity.

Black Lives Matter. We must extend respect and love to each other regardless of skin color, background, gender, or class. We should never condone violent protests, but using them as an excuse to dismiss and dampen voices will only make the problem worse. We must seek to understand the cry of a people who have been so unheard for so long and push forward from a place of love, striving every day to make each and every person feel equally valued and respected.

Jessica Lattanzi is a junior who loves being involved in the Archmere community. In addition to being on the Green Arch staff, she plays volleyball, serves on Student Council, and participates in community service and Auk Ambassadors. In her free time, Jessica enjoys reading, going to coffee shops, and traveling.