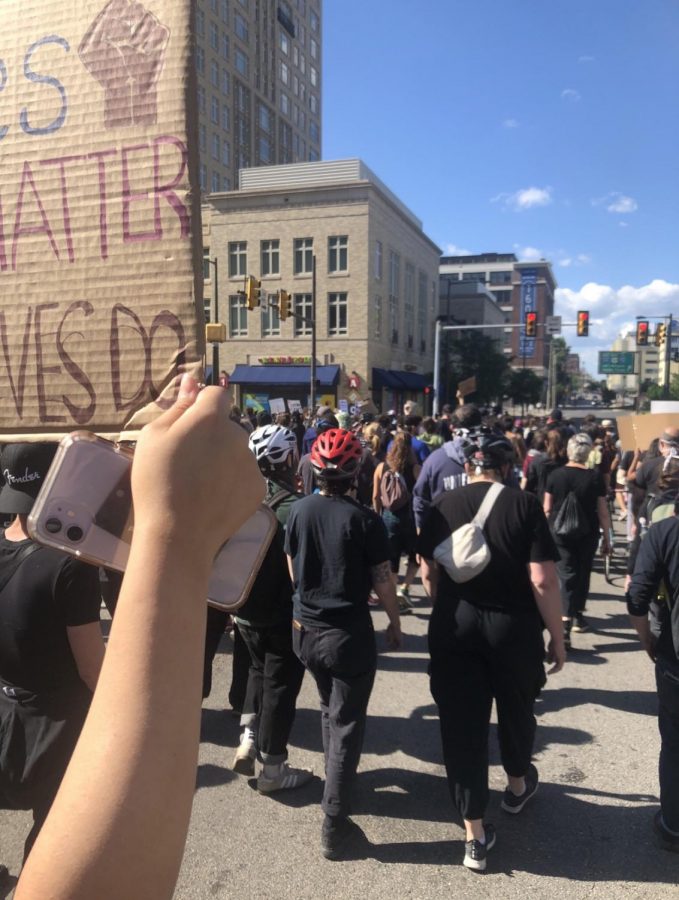 To protest police brutality, people are gathering in Philadelphia and cities across the country in response to the death of George Floyd and other black Americans.
A series of peaceful protests have been happening across Philadelphia in response to brutality and call for reform within the justice system. Due to the protests, Philadelphia will have a citywide curfew from 8 p.m. to 6 a.m.
According to CNN, in Philadelphia, the police have used tear gas and rubber bullets against protesters.
Junior Collin Slade attended the protests, carrying a sign that said “Justice 4 Tony McDade #BlackLivesMatter” and “Black trans women gave me my rights.”
Slade attended two protests on June 1. One was organized by a Philadelphia local and the other was organized by the Party for Socialism and Liberation.
“At the first protest we marched through Center City,” Slade said. “The second protest was the one publicised by the media in which there were protesters obstructing traffic on I-676.”
Also in attendance was junior Hailey Washington. According to Washington, “we walked North five miles on Broad Street in Philadelphia and the police stayed their distance and did not come in contact with us whatsoever.”
For Washington, the experience was empowering and motivating.
“It was greatly motivating and emotional to be surrounded by so many other people who are just as passionate about what is happening as I was,” Washington said.
Junior Victoria Doan also attended a Philadelphia protest.
“Going to this protest was one of the best ways I can educate myself and show my support as a resident of Pennsylvania,” Doan said.
According to Doan, this is different from other political events she has attended “because [Black Lives Matter] is something people have been fighting for so long.”
The latest Black Lives Matter protests were sparked by the death of George Floyd.
In an independent autopsy, it was revealed that Floyd died from mechanical asphyxiation, from compression to his neck and back due to being knelt on by Minneapolis police officer Derek Chauvin. Chauvin had at least 17 complaints filed against him at the time of Floyd’s death. The other three officers involved in Floyd’s death are now facing charges.
The independent autopsy was conducted by Dr. Allecia Wilson and Dr. Michael Baden. Baden was also hired to conduct an autopsy on Eric Garner, who was killed in 2014 from an officer using a banned chokehold during his arrest.
The phrase “I can’t breathe” was said by both Floyd and Garner while they were asphyxiated and has been used at protests.
Floyd is one of the several deaths of black men to occur in 2020, including, but not limited to, Ahmaud Arbery and David McAtee.
According to The Washington Post, black Americans are killed at over twice the rate of white Americans by police.
According to junior Ruchi Hegde, she practices allyship by educating herself through social media, television and books.
Hedge uses the Black Lives Matter hashtag on Instagram for information on numbers to call and petitions to sign. She also watches series on Netflix like “13th” and “Who Killed Malcolm X?”
“Overall, the experience [of attending the protest] was very heartfelt and it was great to see such a diversity of people (all ages, all races and genders) coming together to fight for black lives,” Washington said.