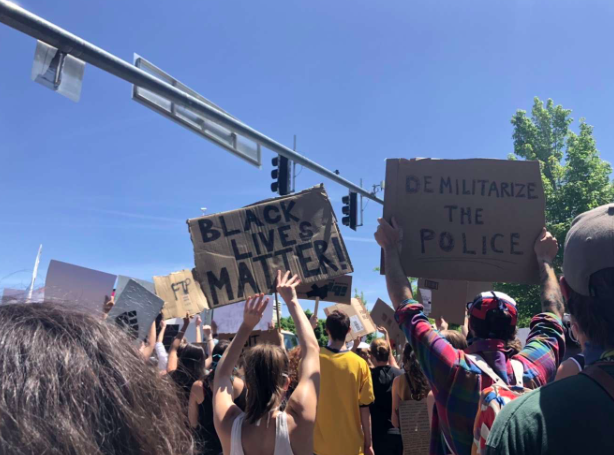 On Tuesday, June second, Bend Oregon had the biggest protest that it’s ever seen. Thousands of individuals from across the community came together in support of the movement, black lives matter. It was truly amazing to see the passion people had in their voices and in their hearts.

During a time where police brutality is still present and where black people across the nation and world are still discriminated against, this protest was not only needed, but extremely necessary to give a voice to the black community and bring awareness to the sad realities of today’s society.

Even more empowering, the peaceful protest was organized by students, one of them being RJ Jones, junior at Bend Senior High School.

“It’s heartwarming to see so many people come together in a time like this. People are making a stand and it shows, even in a small town like Bend that barely has any diversity. It’s a step that we’re making together and the people out there are contributing, showing that like it or not, we’re all in this together,” Jones said.

During the protest people handed out water, held signs and chanted the names of  people in the black community who had lost their lives due to police brutality. It brought the Bend community together. On that first tuesday of June we were stronger than ever before.

“The most empowering thing about the protest was seeing how many people wanted to stand up against the injustices happening in our country,” Storm junior Laine Wallace said.

With another protest soon to come on June seventh, it is clear to see that the community is not backing down. We stand strong and we stand together. Black lives matter and as shown on June second, Bend is ready to fight for this alongside the rest of the world