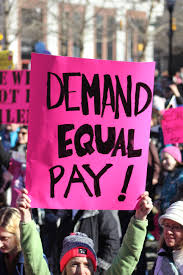 Ever since the beginning of time, women were always considered to be inferior by their male counterparts, and although they have fought for change, they have not closed the equality gap between women and men.

Gender inequality goes back to the days of the Greeks and the Roman Empire. In Greece, women were not allowed to vote.  In Rome, women were forced to stay at the home and were to stay out of politics. However, around the same time in Gaul (France today) and the British Isles, it was common to see women as warriors next to men, and what they lacked  in physical strength they made up for it in ferocity. Some women even ruled nations and were proud military rulers. But they were all soon conquered by the Romans and forced to stay out of politics and to take care of their husbands at home.

In medieval times, women were nurses and doctors who used herbs to effectively combat disease and injury, but men who used practices such as bloodletting and leeches soon took over the medicine business.  The practices they used were less effective and charged a lot more money than women did. On top of that, they said women were prone to hysteria and lunacy. It would not be until World War I and World War II when women gained more freedoms they desperately desired.  In the Soviet Union during World War II, women often served as artillery observers, artillery crewman, machine gunners, anti-aircraft gunners, tank gunners, pilots, commanders, scouts, and snipers.

However, inequality is still a problem, in the workplace, entertainment and sports.  Recently, the U.S. women’s team gained headlines in their fight for equal pay, but the women lost the case as U.S. soccer refused to abdicate, despite outspoken criticism from U.S. lawmakers and the public.

“I think that gender inequality in sports is very bad, women are doing the same stuff as men and not getting paid the same.  The US Womens Soccer Team has always been amazing, yet they get paid much less than men do,” said Garret Z. ‘21.

The women’s national team then filed a lawsuit for gender discrimination, saying their merchandise sales and attendance was lower than the mens’ team because they were not advertised as much as the mens’ team.

“We absolutely do not get promoted as much as our male counterparts.  Yes, I’m talking about the NBA. When you put millions of dollars into marketing athletes and allowing fans to get to know a player they develop a connection with someone or something you are more engaged to and continue to want to see/learn more.  How is anyone going to get to know me or any of my colleagues if we aren’t marketed as much,” Washington Mystics Forward Elena Delle Donne said in an interview with The Guardian.

The lack of marketing and promotion often gives critics the ability to express the lack of interest generated from women’s sports, because it is hiding behind the equal pay situation that the media talks about.

In the WNBA, a new Collective Bargaining Agreement (CBA) was announced after outspoken criticism of the lack of support for the players.  The salary cap now is only $1.3 million , which is about as much as the average bench player makes per year in the NBA, and the highest paid players are only paid about $200,000 per year.  By comparison, in the NBA, Oklahoma City Thunder point guard Chris Paul receives the highest salary out of all NBA players with a salary of $56.4 million. Diana Taurasi, one of the best WNBA players ever, rested during the 2015 WNBA season, most likely because she was paid 15 times as much as she was in the WNBA.

On top of that, WNBA players did not often receive proper support for child care or travel.  Four time WNBA All-Star Skylar Diggins-Smith confessed to playing an entire season pregnant because of a lack of support she received from her organization.  The Las Vegas Aces had to forfeit a game in 2018, setting them back in the playoff rankings because the flight was delayed three times to mechanical problems.  The team eventually flew on seperate planes to Dallas, but by the time the players reached Washington, where their game was scheduled, they were forced to forfeit because they were exhausted and there was an increased risk of injury.  A direct charter flight to Washington for the Aces was also far too expensive, which is why a lot of WNBA teams fly public airliners. In sports, female athletes are starting to stand up for themselves and have been forcing change in the sports world.

In the workplace, women are payed less than men by a large margin.  The average woman makes about 80 cents for every dollar earned by a man.  Women of color, however, have it far worse. The average African-American woman earns about 62 cents to the man’s dollar, and Hispanic woman have a pay gap of 54 cents for every man’s dollar.  Businesses who pay men and women equally are often micro-businesses, a business with nine employees or less, and 42% of the people in micro businesses on average are women. Some women are not even payed in their work.

“What is clear is that this unpaid work is fueling a sexist economic system that takes money from the many and puts money in the pockets of few,” said the organization Oxfam International.

Gender inequality is not limited to the United States.  Recently, research has shown women make up only 24% of the United Kingdom’s tech industry.  Former Culture Secretary Baroness Nicky Morgan stated some smart speakers often struggled to hear women because they were predominately tested on men or with algorithms that denied women jobs or loans, and said that the lack of women at tech firms were a cause of this problem.

“If women are not at the table when these discussions are taking place then there is a risk that gender inequality gets embedded.  Whether it is voice recognition designed for male voices so women literally cannot be heard or algorithms designed to sift job applications that can unintentionally hire more men into male-dominated jobs,” Morgan said in an interview with The Telegraph.

The Tech Talent Charter (TTC) a not-for-profit organization whose goal is to increase the amount of diversity in the workforce, found out only 14 % of businesses had a target for the amount of women they were to give job interviews.  35% also have no strategy for improving gender representation, but half of them do plan to implant one by 2020.

Women also rarely talk to their boss about their pay or promotions, often out of fear of getting fired.  This leads to a lack of female role models in the workplace.

“I believe gender inequality is very much based on the fact that the Industrial Revolution was a more patriarchy run society.  I think some of those beliefs may still flow through very few people,” said Ryan H. ‘21.

Some feel that nothing needs to change.

“In my life I have not seen gender inequality in a workplace and I feel it has been better over the past few years of getting equality in the workplace.  I also feel feminists have made it all a much bigger deal than it should be,” said Jaylynn B ‘23.

Businesses and sports organizations are working to give women equal pay and opportunity for women.  More women are also fighting hard for the same equality as men. With the amount of progress that women are making, then men and women will one day stand side by side as equals.

Sam Hargett is a junior at Olentangy who plays basketball and soccer. He is also involved in service club and is a big fan of Columbus Crew and the Portland Trail Blazers. He hopes to one day become involved in sports journalism.