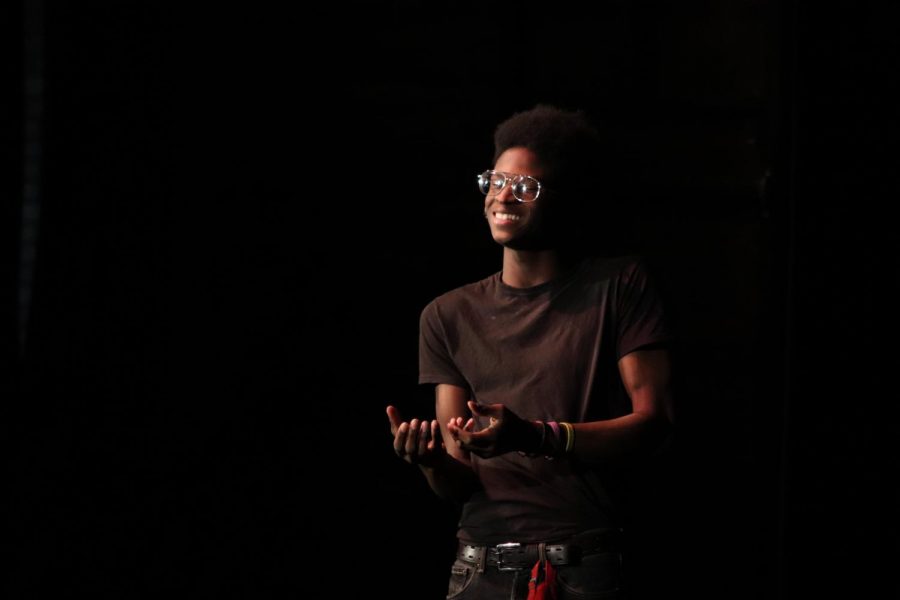 No youth experience in Ann Arbor is uniform, especially when comparing white and black. From the groggy eyes of black teens that catch the bus in the morning from Ypsilanti to the ones sitting in the classrooms staring back at white faces, these students only make up about 14 percent of the Ann Arbor Public School system’s population.

Three teens weigh in on their Black Youth Experience.

6:05 a.m.. Ashanti Campbell would catch the public bus in Ypsilanti to make it before the 7:45 bell rang at his Ann Arbor high school. The mornings that he was not sleeping during the ride, he would be catching up on schoolwork or talking to other Ypsilanti kids commuting to Ann Arbor. Crossing the city boundaries, Campbell could see the visual differences: the cracked sidewalks, the businesses and the university buildings.

7:20 a.m.. Campbell would usually arrive at Pioneer High School, preparing for his first hour class and completing left-over homework assignments. Some of his teachers didn’t understand the lengthy and unpredictable commute, and reprimanded him by lowering his grade when he came late.

Campbell embarked on his extensive commute each morning because of the reputation of the Ann Arbor Public Schools system. Originally living in Detroit during his early elementary school days, his dad found a job in the Ann Arbor area and enrolled Campbell at Dicken Elementary School –– commuting each day since he was in seventh grade when they moved to Ypsilanti.

Pioneer High School’s population is about 53 percent white according to an MI Data Report. Campbell has had to navigate predominantly white spaces. Around his white friends, he introduces a different vernacular consisting of “totally” and “oh my God.” The unconscious code switching not only allows Campbell to show every side of himself, but it allows him to appear more approachable to his white friends.

“Socially, being the only black person in your friend group, you have to pass off jokes and that’s like your character trait, it is the black guy,” Campbell said. “But then again, I went to Dicken [Elementary School] so I’ve been here most of my life, so I got used to it.”

Campbell has never experienced blatant racism during his time at Pioneer, and before graduating in 2019, he surrounded himself by people who wanted him around. Yet during his time at school, there were things beyond code switching that Campbell had to keep in mind –– like always feeling out of place among his peers and looking different than all of them. The generational wealth his peers obtained also set them apart: they had parents that graduated from the University of Michigan and came from wealthy backgrounds. Campbell’s dad was from the Southwest side of Detroit and worked in construction.

As African Americans make up about 15 percent of Pioneer’s student body, Campbell has noticed that sometimes his black peers can be divided. By the people that they choose to surround themselves with, students can sometimes separate themselves. But it is hard to be completely surrounded by other black people in a predominantly white community.

“I think the black community in Ann Arbor is strong, but also segregated in a sense,” Campbell said. “It’s like as a people, we often like to make groups. Lot pack mentality. And we gravitate toward people that we can relate to. I think also about just relating to the people around me and what I see in the class. So the black community in Ann Arbor as a whole, we do see each other and acknowledge each other, and we do love each other to a certain extent. But when you talk about if we’re as connected as I feel other communities are, like the other races like the Asian community, or white community, or Arab community, I think we can work on that in a general sense. I think we segregate ourselves in our own communities.”

Poetry has become Campbell’s therapy, allowing him to put into words what he may be embarrassed to say. It has also become the basis for his activism, pumping change, notification and education into a community willing to be changed. Campbell has translated his identity and experiences to poetry, music and performance.

Hip-hop helped to ignite Campbell’s talent for poetry. His brothers were rappers, and he was exposed to lyrical art at a young age. He started out singing, but something was missing. There were words left for Campbell to say that seemed impalpable. Ever since his creative writing teacher at Pioneer, Jeff Kass, introduced him to the idea that what he was writing was poetry, he hasn’t stopped writing.

When Chelsea Clemetson moved from Washington DC, the first thing she noticed was how many white people there were in Ann Arbor. She wasn’t used to the predominantly white spaces, and her new neighborhood, new downtown, new schools –– all of them were significantly less diverse than where she grew up.

In Washington DC, she was immersed in diversity. When she goes back to visit, or to see her Grandmother in Trinidad, she is in predominantly black spaces. But returning to Ann Arbor is like a culture shock.

Out of the 530 students enrolled at CHS during the 2018-2019 school year, African Americans made up only about five percent of the student body according to MI School Data. Clemetson is in predominantly white spaces all the time. White friend groups accompany white classrooms, and Clemetson is one of the only black people among her friends. One of her friends even told her that she was the first black person that they had ever been friends with.

Her new town brought a new unspoken responsibility: representing the entire black race. In her friend group, Clemetson feels as though she has to represent her heritage and race, with the responsibility of educating people about her culture. Becoming the token black friend, she feels like she must make sure people understand the importance of diversity.

There are only two black staff members at CHS, and only one is in an academic teaching position. With little black leadership from adults in the classroom, Clemetson feels like it is her job to step up into the vacant position. The lack of diversity at CHS is alienating.

“The longer I went to Community, the longer I realized being a part of the friend group that I’m apart of sort of has an impact on how I see myself versus how I see everyone,” Clemetson said. “I find it difficult to relate to just having a friend group of a large group of white people. Not necessarily just the fact that everyone in the friend group is white, but the fact that having only white people would have an impact on how much you’re exposed to other cultures and the way other people see their lives.”

Outside of the classroom, Clemetson is a part of predominantly white activities and extracurricular groups. The families that live in her neighborhood do not look like her. But when African Americans only make up about seven percent of Ann Arbor’s population according to the 2010 US Census, it is hard to find a community of people that similarly identify with each other on racial terms.

Her outlet of racial expression and heritage outside of her family is nonexistent. However, it is important to her to have a community of people to identify with. After she graduates from CHS, she hopes to go to a diverse college. Clemetson is considering Howard University, a Historically Black College or University (HBCU) in Washington DC, because it is one of the top schools for black engineers. Alternatively, she is also interested in attending schools like CalTech or Maryland Institute of Technology (MIT), two universities that are significantly white.

Rios Hsu looks different from her family. Her mom is Mexican, her dad is Chinese and her brother his Korean. Rios Hsu is black. At school, there aren’t many people that look like her either.

Rios Hsu’s peers don’t look like her either. At CHS, her peers are predominantly white. She often has to interject when her peers say something offensive. Similar to Clemetson, Rios Hsu is often playing the role of representing her entire race. When black history and oppression are talked about in the classroom, it is perceived that she is speaking for the entire black community, and not voicing a personal opinion. To her, two choices are presented: speak for the black community, or don’t speak at all. But when she does speak up, she feels like she is seen as the “loud black girl” or “annoying black girl.”

Some of the jokes and comments her peers would make when she was younger were ignorant; stereotypical jokes about her being able to run fast or liking watermelon because she is black were something she heard often. Sometimes her white peers will say the N-word, justifying their speech by saying they’re quoting a song so it doesn’t actually matter.

It is upsetting, especially when someone she personally knows says the N-word. White bystanders can be complacent when their peers say something offensive, especially when it is their friend. They may not want to hurt their friend and tell them what they did was wrong. But most importantly, she is the one that is hurt, disappointed that she didn’t understand how bad it was when she was younger and that she didn’t speak up.

At CHS, she finds that her peers don’t understand everything about being black, and no matter how much history they learn, it is still hard for them to completely connect with her.

“There’s always the few students that don’t understand anything, or they don’t realize that what they say makes you uncomfortable,” Rios Hsu said. “It doesn’t ever really get talked about it. I guess during Black History Month, you do all this stuff to celebrate being black, but you don’t talk about the hard parts about being black and how it’s different at Community, Pioneer and Skyline.”

In the afternoons, Rios Hsu takes classes at Pioneer. There, she is able to feel more like herself because of the increased diversity. More black adults in teaching positions pose leadership, relating to the students that look like them more easily.

The relatability of someone that looks similar is lost in Rios Hsu’s household. Her mother has tried to compensate and find alternative ways to relate to her. She received “The Talk” from her parents when she started driving, discussing matters of what to do if the police pull her over. Because neither of her parents are black, her mother found YouTube videos about it so Rios Hsu could hear advice from other black people that have been in the situations that her parents have not.

Rios Hsu’s black leadership and relatability came from her hair stylist. Their relationship was awkward at first, and Rios Hsu found she was timid to converse with her. But as her visits became more frequent, they became closer. The leadership presented from Rios Hsu’s stylist came from the stories she would tell her. Being closer to Rios Hsu’s age and having lots of experiences with different career paths made their connection easier. They don’t always talk about politics or black and white, but having someone that looks like Rios Hsu makes it feel like someone is always on her side.

Unfortunately, the connection that she has with her black hair stylist is not emulated in her other daily settings. Her predominantly white classrooms and adoptive home are not black.

Tai Tworek is currently a junior at Community High School, and this is her third year on Communicator staff. She is one of four print editors-in-chief, and is super excited for another great year of writing, editing and designing — all fueled by Revel Berry Yerba Mates and iced coffee. When not writing articles, Tai is found playing soccer for Detroit City Football Club and Skyline High School. Or, she is blasting music in her bedroom while drawing.

IF I WAS PRIVILEGED…LIFE IN A EUROCENTRIC SOCIETY