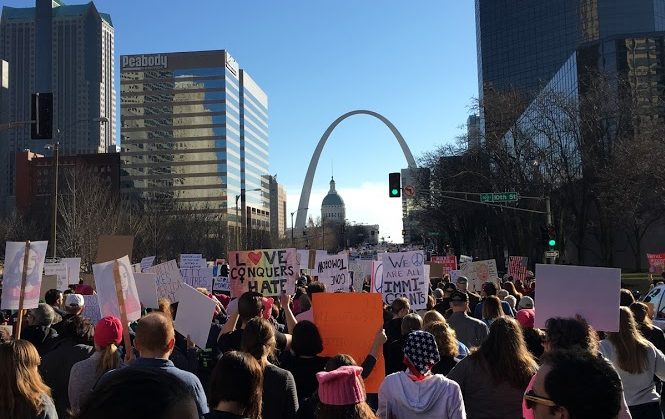 Once again, protesters tried to display utmost support for women’s critical issues as well as immigration, impeachment and the environment to increase voter participation.

This supposedly “now more diverse” protest spread awareness of an underlying issue: the Women’s March represents the social divisions of feminism and the concepts of “separate but equal” concerning women of color, especially for black women and other marginalized groups.

Specific to the march, the injustices began when the original title “Million Women March,” mirroring the 1997 protest for family unity and black female awareness, was replaced. Then its initial goals of vast representation were deserted to accommodate the influx of supporters and the anti-Trump agenda in 2017.

This year, Black Lives Matter: Los Angeles wasn’t invited to the fourth annual demonstration for the first time. The Women’s March Foundation provided a statement saying this is an “important” election year, therefore, they will only highlight those “who have a mission to register and encourage people to vote.”“

Traditional feminism only spares time for coverage of minorities’ inconvenient issues when the opportunity for significant change and awareness will pass. ”

Traditional feminism only spares time for coverage of minorities’ inconvenient issues when the opportunity for significant change and awareness will pass, or if it alludes to ideals of white, middle class women to take advantage of.

As a black female, I cannot choose between my womanhood and my blackness for representation in today’s feminist ideas. Black women are still the most disrespected, marginalized and unsupported women in all aspects of society.

Specifically, black women are reduced to organizing separate demonstrations to advocate for our safety, rights and concerns such as systematic oppression, high rates of violent, sexual, and missing persons crime cases and disproportionately low academic achievement.

Not all women may ever be represented in a women’s march because of diversity and lack of emphasis on minorities’ histories of discrimination and struggle in educational systems.

However, there are too many complexities within feminism to think there is a one size fits all compromise to solve systematically ignored political conflicts.

Marginalized and transgender women’s issues are women’s issues too. They should be issues important to voters and to the fight against inequality because they are most targeted by democratic candidates.

Even though I preach strength in numbers and support protests, I cannot encourage my black sisters to waste their support for the Women’s March next year until the march begins to meet a higher standard of inclusivity and diversity.

Women of every color and creed can be triumphant together, but first we must understand the importance and strength of our shared values and interests to be true changemakers.

To eventually support all women, feminist movements like the Women’s March need to  repair their reputation and address their prejudice and transphobia by creating alliances with minority and transgender advocacies, and allowing them to hold meaningful leadership positions.

Lauren Pickett, senior, is the In-Depth Editor for the MHS Messenger. This is her second full year on staff. Also, Lauren participates in two other activities: Marquette Academic and Cultural Club (MACC) and Student Council. She hopes to advance her journalistic skills to advocate for and inform others.

Race and Gender: The Admissions Tiebreakers?