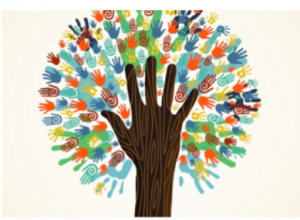 Diversity has been a problem for a very long time. We have been through thick and thin just to get to the point we are today. The history of when people were welcome and accepted is a very long list that I will try to summarize.

We will start in the 1880s when there was a rise in European immigration to America. While there are many more incidents where immigrants moved to America, this was a big point in history because of the mass numbers. Over two million people entered the US between 1880 and 1920. “The peak year for admission of new immigrants was 1907 when approximately 1.3 million people entered the country legally,” says History.com. Many of the Europeans were running from their masters that imprisoned them as indentured servants, while some left because of the overwhelmingly catholic German, Irish, and Scandinavian immigrants arriving. There was famine, political conflicts, and religious persecution so they were lead to the US for the freedom of persecution and the economic benefits we had. There was also a rise of Filipinos in Hawaii in 1906 because they viewed the islands as a paradise of freedom and prosperity, which a lot of us still do, and who can blame us. The Ilocos were the main group that migrated to Hawaii for better living conditions and economic opportunities, and at the time California and Hawaii were the best options. Immigration was a big part of our history, many people came to the US to get away from their problems because of the huge advantages we had at the time.

As time passed, we became more and more adaptable and flexible with new people and new ethnicities, even if we have a rocky start getting to that point. It took women forever to be able to just leave the house without being accompanied by a male! We were told that men were superior to us in every way. Even now there is a lot of sexist problems in our society. For a while, we were viewed as property and not as people. Over time we showed everyone that was not at all true. We couldn’t get jobs and we couldn’t own any belongings without male approval. We were even left out of the Declaration of Independence, which states “All men are created equal,” telling the world that men and women are not equal and shouldn’t be viewed as such. It wasn’t until we started standing up for ourselves that it became clear that that was not the case. We fought our way into higher positions and women have even been to space which was unfathomable 100 years ago. We came a long way from what the world was like 100 years ago, and hopefully, we continue to change and created a world where women can do everything men can with no limitations.

Women were not the only people that have been slowly welcomed into the world, and it would be odd if I wrote a whole essay about diversity and not mention people with darker skin tones that have been subject to racism, prejudice, and discrimination more so than everyone. It has been a rocky road for black people for as long as people can remember. As soon as Europeans landed in Africa people began capturing Africans and selling them as slaves. Most of our early presidents and people of power owned slaves even if they were protesting slavery. People wrote thousands of books about people running away from slavery, some of which have turned into popular literature books that are read in school. Even after slavery was abolished by our 16th president, Lincoln, people found loopholes to getting black people to do their bidding or just treating them like dirt as a whole. Black people gained their freedom but were viewed as lesser compared to white men. In 1896, the court passed the “separate but equal” doctrine that said all men shall be equal but separate making schools, public places, bathrooms, and more separated by the color of your skin. Riots and protesters fought back on this segregation, finally forcing them to take back the law. In 1954 the case Brown v. Board of Education removed the doctrine, but the real removal of segregation was long and tedious. Black people slowly gained the rights that should have been offered to them a long time ago, and even today we still see racism but the difference between now and the 1970s is incredible.

Diversity is a very real and important thing that needs to be taken seriously whether it is with gender, race, sexuality, body type, or anything else that changes us from the rest. We are all different and we all deserve to be who we are without judgment. We are now able to be who we want, wear what we want, act in ways that were not allowed before, as long as it is legal, and I honestly believe that this will only continue to improve. People in this very school could be very important people in history in only a few years. Diversity is a very beautiful thing, we came a long way and we still have the future to continue to grow.

Jess Winkler is a 15-year-old sophomore. She is passionate about science and history, which she hopes to continue to follow after high school. She is part of the Forest Grove shooting team and competes in the cowboy action shooting club. She is an aspiring photographer and writer who loves to sit quietly in a corner with a good book. everyone who comes in contact with her will describe her as kind and awkward.

The importance of an open mind