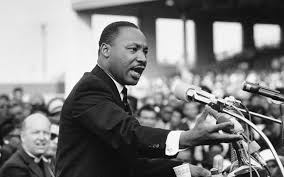 Why do we celebrate MLK day in January? Its not like its Christmas, Halloween, or the 4th of July. So what makes MLK day so important to American culture?

Well, person who doesn’t know much about American history, let me fill you in. Martin Luther King Jr. was a civil rights leader during the civil rights movement in America during the 1960’s. He took the same approach of a similar leader twenty years before him, named Muhatma Gandhi. This was the idea of action through non-violence. One example of this could be the March on Washington in 1963.

Martin Luther King Jr. Day is a holiday that is celebrated in honor of the civil rights leader Dr. Martin Luther King, Jr.  It represents the hard fought battle for civil rights in the United States during the 1960’s by African Americans. The message behind Martin Luther King Day is to bring people closer together and for everybody to be treated as equals. Black children and white children used to not be able to go to the same schools. Now there is ethnic diversity in schools all over the country.

Martin Luther King day is important not only to African Americans. It is also important to different races all over the country. MLK was an inspiration and a role model for people of all ages. If everyone was to take a page out of Dr. King’s book, the world would be a better place for everyone.

What Martin Luther King Jr. Day means to me is more than just a holiday.  If it wasn’t for Dr. King I wouldn’t be able to write the stories on a platform like this. My parents might not have ever met and I wouldn’t be here providing people with great stories every day. I am half African American and half Caucasian. Kids like me are living proof of MLK’s impact on the world. His work is not just shown in interracial relationships but in different parts in society as well. There is more equality in the world than ever. Black kids are going to school with white kids in schools all over the country. We had a black president that many white people voted for, and there is a huge amount of ethnic equality in sports all over.

Martin Luther King Jr. was more than just a man, he was a catalyst in the fight for social equality all over the world.

Shining Light: Explaining the Effects of Stereotypes About the Black Experience