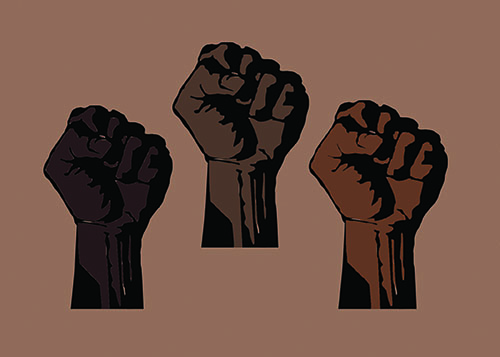 It was in 1926 when Carter G. Woodson and the Association for the Study of African American Life and History established the second week in February as Black History Week. Their mission was to promote the accomplishments of African Americans and encourage school systems to coordinate their focus on the topic. By the mid-1960’s, the week was transformed into Black History Month with the help of proactive college students inspired by the Civil Rights movement.

“It’s a chance for me to celebrate my culture in an area where there’s not a lot of people like me,” senior Martin Searcy said. “I can get my shine on.”

Through snapchat filters and trending topics on Twitter, black students are able to celebrate the month on social media and in their personal lives, but how much is the month actually acknowledged at De Soto High School? Not at all, according to some.

“Maybe since I’m not in any social studies classes anymore that’s why I’m not hearing anything about it [Black History Month], but I don’t really remember any discussion in my previous years during those classes,” senior Alexis Cook said. “I definitely think the school could do more for the month, especially since the minority population at De Soto is so small. I feel like it would help those kids feel empowered and accepted.”

Senior Zekkiah Hird agrees, adding that “celebrating achievement by people of color in the way that white achievement is celebrated in classrooms would do no harm to anyone and should be more encouraged.”

Though days of slavery and extreme discrimination are mostly in the past, adversity for black students is still easy to come by.

“Being a PoC woman in a low diversity school can be so difficult, especially growing up. When you look around and no one has the same hair as you and no one is as dark as you, it can really affect your self-esteem as a young girl,” senior Alyse Leal said. “Representation is so important yet it is lacking and always has been.”

Just last week, a student at DHS posted a picture to Snapchat with one of the Black History Month filters crossed out in white ink.

As most know, the popularity of the Black Lives Matter movement has led to a social justice movement in social media itself. Twitter has become a common outlet for exposing and discussing civil rights violations within Hollywood, the government and daily life.

“I’m all for people being aware of the things and issues that affect people of color, and it brings me hope that my future will be an even more accepting and changed place, but with too much ‘awareness’ comes people who forget their place. Don’t get me wrong, conversation about black issues is a good thing, but being black, there’s a lot you hear, and a lot of it can be insensitive, even if what’s being said isn’t meant to be,” Hird said. “It is just important to think about the things you say or do before you do them. Most of all, be educated on the things you say before you say them. Being thoughtful is a good thing.”

According to Cook, staying educated about current issues and the discussion around black adversity is the best thing you can do.

“I want people to actually do some research on issues before they comment on them,” Cook said.

Some resources to stay educated:

Meet Clara Sloan. This is senior year, as well as her third year on staff. She has previously worked on the Green Pride as a staff reporter and opinion editor. Her favorite thing to write is opinion stories because it allows her to explore controversial topics. When Clara isn’t writing for the Green Pride she spends her time reading, hanging out with friends or downing her second venti. Besides Newspaper, Clara is involved in NHS, Forensics, Scholars Bowl and takes various AP courses here at DHS. You can reach her at greenpride.clara@gmail.com.