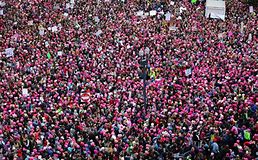 It is 2018 and people everywhere are finding new ways to voice their opinions. The communication world is advancing everyday; it all started with tying a note to a carrier pigeon to fly through the city and has ended with painting a statement on a posterboard and running in large groups through the streets.

The different forms of protesting include but are not limited to, social media, boycotting and crowds in streets.

Protesting has always been a strong and effective way to get a point across. Since the new presidency has taken place, women have found new ways to communicate.

I believe that the new form of protest, called “women’s marches”, has helped bring awareness to the equality that women deserve. I have never participated in one of these marches, but I know students who have. Principale Dan Serrano believes that it is a great way to get a point across and that he thinks student participation is completely appropriate as it will only add to the diversity of the march.

I agree with Serrano; these marches typically will get televised or will go viral on multiple social media platforms, and the more diverse the crowd is, the more effective the point gets across. These marches allow us to say what should respectfully be said without causing a big riot.

At first, when these marches started to take place, I did not care for them as I thought they just conformed women into one group of undeserving people who should be handed what they desire. In my eyes, protest can either be very respectful or very violent, and that has always been a big worry of mine. What if one of these marches becomes violent and will put a standard of violent motivations for every march after that?

Now looking back at the way things were handled and looking at how they are being organized, their is a lot of improvement and a lot more respect put into the overall march.

Throughout the last couple months, we have gone through several different fads, like fidget spinners, and gluten free everything, but I think that these women’s marches will not decline in numbers like the other fads of the century.

These marchs have been held all over the world, including in London, Brazil, Argentina, and many more. Some of the topics of these marches include equality of women rights, planned parenthood, and the objectifying ways that women are viewed as. I hope that these marches advance into bigger and more effective protest while still remaining respectful and peaceful to the law.

This is just one small way that individual women are gaining the respect that we deserve, and one big way to unite women around the world.

Morgan Cleary is a first year student to newspaper, as one of the many seniors in the class, she writes for the DECA team, concert band, theater, and students fashion. When she is not writing for the paper, she is either on the basketball court or the track field, she enjoys photography and learning about the medical field.