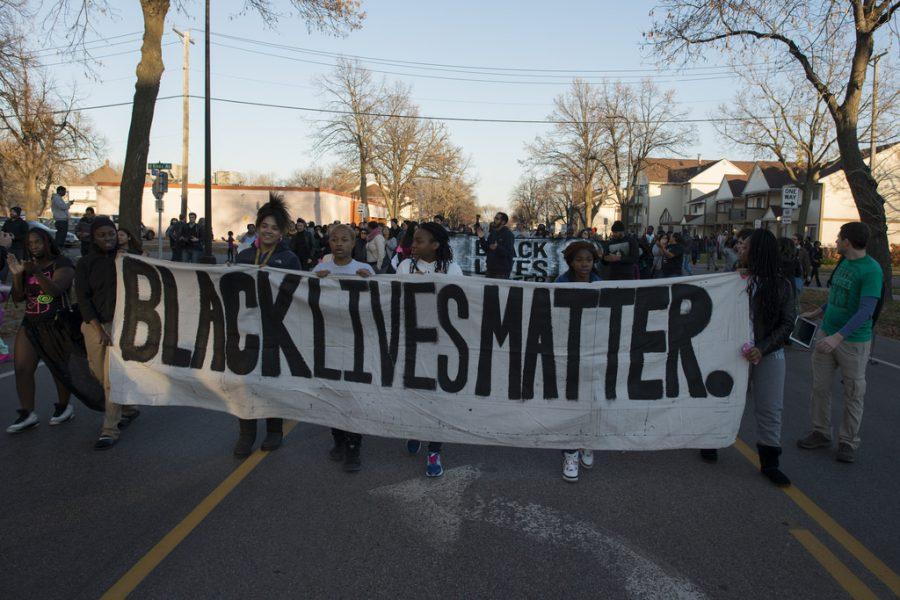 Twelfth grade English classes are currently studying the collective works of Dr. Martin Luther King Jr.  Recently, a question was posed to my class: How does the Black Lives Matter movement compare to the Civil Rights movement?  Is there anything the Black Lives Matter movement is doing wrong?  I responded by comparing the current racial climate in America to a forest in need of burning. Periodic forest fires clear away everything that threatens the survival of the trees, while ensuring their growth and regeneration.  Forests that have not burned in a while are so dry that one spark can ignite the entire forest in an instant.  The Black Lives Matter movement is this fire ignited by a single spark: All the pain and suffering experienced by black people in America every day is finally being brought to the forefront of the nation’s consciousness. I then went on to explain that the difference between BLM and the Civil Rights movement was that Civil Rights had King at the helm, guiding the movement in a nonviolent direction.  I said, however, that BLM has no such leader and is therefore more prone to violence, implying that BLM was an inherently violent movement.  What I didn’t say, though I realised it the instant that comment left my mouth, was the truth: that BLM is actually not violent at all, much like the Civil Rights movement, but that the media sensationalizes any ounce of violence it can find and blows it up to make it seem like the whole movement is violent.  In reality, the violence in the movement is comparatively nonexistent compared with the prevailing tone of nonviolent direct action.  It was at that moment that I realized I had been played by the white media.  There I was, another ill-educated and uninformed white person making a factually inaccurate point to my English class.  I’ve never wanted to eat my own foot more.  I had uncovered one of my own unconscious racial biases, the one that allowed me to unquestioningly accept the notion that BLM was in any way a violent movement.

Virtually every white person possesses these racial biases, conscious or unconscious.  During a conversation with a dear friend after having watched the movie Selma, I uncovered another unconscious racial bias: that, although I truly know that black people aren’t all bad, I believed that lots of them in Wilmington were, and subconsciously, I had equated people who I thought looked “sketchy” to black men.  I realized that a part of me thought that there was simply a higher chance that a black person on the street would want to hurt me or rob me than a white person.  Feeling beyond ashamed, I began thinking about all the subtle but impactful little thoughts like that that I, as a white person, have accumulated in my subconscious. I, like most others, have never been outright taught to be racist, but I realized that all the tiny unconscious biases amount to essentially the same thing.  By bringing these thoughts to the forefront of my mind, I could begin to fix the way I think, and I feel lucky that I go to a school and have friends who help me ‘stay woke’ and realize that society has polluted my brain with racist ideals, even if they come short of outright racism.

The need for white people, like myself, to rip open their subconscious and expose the ugly parts in order to be rid of them, is an important step in the journey to reach pluralism.  Harvard University’s Pluralism Project explains that pluralism is not merely the acceptance, but the energetic engagement with diversity, the active seeking of understanding across lines of difference, is based on dialogue, and does not require us to leave our identities and our commitments behind and instead encourages us to celebrate our commitments.  During a speech at AT&T’s Employee Resource Groups conference, Randall Stephenson, the current CEO of AT&T, said, “Tolerance is for cowards.  Being tolerant requires nothing from you but to be quiet and not make waves.”  In the past, people were encouraged to simply tolerate diversity.  Now, it is understood that in order for white people to properly comprehend the importance of the Black Lives Matter movement, nothing less than pluralism is required.

Black Lives Matter is arguably the most important movement of our generation.  As for the difference between Black Lives Matter and All Lives Matter, someone once put it to me in a way that was incredibly easy to understand: they compared All Lives Matter to ‘All Houses Matter’, and showed an image of a burning house next to a regular, uncharred house, and a stick figure pouring a firehose onto both the houses equally, saying “All houses matter!”  This analogy was so striking for me.  It really made the issue crystal clear.  Yes, all houses do matter, but the house on fire was the one that needed immediate assistance.  Yes, all lives do matter, but black lives are the ones being systematically harmed, endangered, and ended.  This movement is not only good, but necessary to make those who are not involved in the daily struggle of being black in America understand that issues of race remain part of our everyday society.  Only when outsiders to the struggle, like myself, realise the reality of microaggressions, can we work to create change and create a united society.  Black Lives Matter is a movement that seeks unity, purely and simply.

Issues of race have been pushed under the rug for so long that America as a nation has become blind to the atrocities being committed practically on our doorsteps.  Too much time has passed since the Civil Rights movement, when these issues were brought into the forefront of our national conversation; the forest needs to burn to allow for the regrowth of this nation as one united amidst diversity.  Thanks to the legacy of MLK (and no thanks to the media), this all-too-important movement remains nearly completely without violence, and certainly without signs of slowing down anytime soon.

During a meeting of African American Affinity recently, Robert Baldwin ’18 put the whole matter simply and beautifully: “All lives can’t matter until black lives matter.”  And in order for black lives to matter, white people need to exercise their pluralistic muscles and work hard to truly understand and embrace the black struggle for real equality.  The only way America as a nation can achieve unity across the lines of race is through complete understanding from all sides, and in order to understand, we need to acknowledge our faults so we can move past unconscious prejudice and on to a united future.

The Future of Diversity